Whether you’re a parent or a professional educator, we know keeping your kids challenged and entertained during this pause from a normal school schedule can be difficult. We’re here to help! We’ve got online resources for all ages designed to engage and educate. Visit our library to find online resources related to WWII history, STEM education and aviation from our partner organizations and other reputable sources.

78th Anniversary of the Battle of Midway

If the attack on Pearl Harbor launched America into World War II, then the Battle of Midway is best remembered for turning the tide of the war in the Allies’ favor. In early June 1942, the U.S. Navy and Imperial Japanese Navy engaged in an epic battle in the Pacific Theater that resulted in America’s first decisive victory in the war that would define a generation.

Join us for a LIVE chat with Captain Tammie Jo Shults, one of the U.S. Navy’s first female F/A 18 Hornet pilots and Southwest Airlines captain.

Hear her story of resilience and perseverance that prepared her to respond to this emergency, saving the lives of 148 passengers and crew.  We’ll talk with Tammie Jo about her experiences, as well as highlight career pathways and resources for young people who are interested in aviation.

75th Anniversary of the Victory in Europe

Victory in Europe Day (V-E Day) on May 8, 1945, signaled the end of a long nightmare for the U.S. and her allies in Europe. WWII cost the lives of millions and brought untold suffering and privations to the populations of entire countries. Millions of people across the world rejoiced in the news that Germany had surrendered, relieved that the intense strain of total war was over.

We commemorated the 75th anniversary of this day with famed WWII Tuskegee Airman and retired Brigadier General Charles E. McGee, honoring the sacrifice that was experienced in the pursuit of peace and exploring the values and traits that led BG McGee to success in his career.

The attack on Pearl Harbor threw the United States into a panic. The threat of war, which was raging in Europe and parts of Asia, had not become reality for the U.S. until Japan succeeded in its surprise attack on December 7, 1941. Suddenly, the entire country was fighting a battle that required great courage and sacrifice.

In the midst of the panic and confusion, Japanese-Americans were singled out as potential enemies. President Roosevelt signed Executive Order 9066, authorizing the internment of tens of thousands of U.S. citizens and lawful residents of Japanese descent. The injustice of that order and the imprisonment of loyal Americans had far-reaching effects that still impact us today.

Join us as we explore this topic with Matthew Elms, author of When the Akimotos Went to War: An Untold Story of Family, Patriotism, and Sacrifice During World War II and Jacce Mikulanec, President and Executive Director of Japanese Cultural Center of Hawaii. Educational resources will be presented to learn more about the internment of Japanese-Americans in Hawaii.

Student Resources:
Click here to download additional resources to accompany our webinar about the internment of Japanese-Americans during World War II.

In addition to learning about the children who experienced WWII, this webinar will teach students how they can become young historians to collect, document, and preserve their own family’s stories.

Student Activities
Get your student involved in oral history! Download these at-home activities and resources:

Seventy-eight years ago, the world was at war and the United States was reeling from the surprise attack on Pearl Harbor. Imperial Japan continued its push throughout the Pacific, gaining territory and valuable resources to support its strategic goals. A bold plan was needed to stop Japan.

The Tokyo Raid, better known as the Doolittle Raid, was America’s answer to the enemy’s aggression. On April 18, 1942, Lt. Col. Jimmy Doolittle, an experienced pilot with the U.S. Army Air Forces, led a group of 16 B-25 Mitchell Bombers in a secret mission to bomb mainland Japan. Join our webinar to discover the resilience and innovation that defined the Doolittle Raid, featuring Jonna Doolittle Hoppes, granddaughter of the famous aviator, and Seth Paridon, historian at The National WWII Museum.

The Attack on Pearl Harbor

The National WWII Museum and Pearl Harbor Aviation Museum hosted a webinar for students and families to learn how the “day of infamy” changed the lives of Americans. Students participated in a live Q&A with educators from both museums and learned from decision-making scenarios. Uncover how WWII innovators used the “adopt, adapt and apply” technique during the war in this National WWII Museum webinar. STEM in 30: Women in Aerospace

From the time the airplane first took to the air, women have played an important role in shaping the aerospace industry. Join STEM in 30 and Anousheh Ansari, the first female private space explorer, as we take a look at the contributions of early women aviators, female astronauts and other pioneering women. STEM in 30: Stars and Exoplanets

Learn about the “Diamonds in the Sky,” AKA stars and exoplanets in this STEM in 30 episode created by the Smithsonian National Air and Space Museum. Perfect for elementary students, this 30 minute video will help kids understand what they are actually looking at when they gaze up at the night sky — are they seeing stars or something else? The Battle of Okinawa Interactive Timeline

The Battle of Okinawa lasted nearly three months, making it one of the longest and deadliest battles of the Pacific War. Explore the timeline of events surrounding the battle. What Would You Do?

In this scenario based on actual events of the Battle of the Philippine Sea, students must make a difficult decision that could potentially endanger the safety of an American fleet. Student Activity: How to Properly Fold the Flag

Practice how to properly fold an American Flag by following these step-by-step instructions. During WWII, scrap drives brought the community together to unite for a common purpose. In this lesson, students will make something that was used during WWII, learning more about this historical time through a hands-on activity. Have your students take part in the observance of National Former POW Recognition Day on April 9, by completing this lesson plan from the National WWII Museum. Surviving Imprisonment in the Pacific: The Story of American POWs challenges students to critically assess the nature of violations committed by the Japanese forces during World War II. A fun and educational activity for kids of all ages! Have students complete Education World’s scavenger hunt worksheet about “firsts” in aviation history. Use the provided information in the Famous Firsts in Aviation page to help answer the questions! The captivating true story of Tammie Jo Shults’ remarkable life and how she saved the lives of 148 passengers and crew aboard Southwest Flight 1380. When the Akimotos Went to War by Matthew Elms

This nonfiction book captures the story of three Japanese-American brothers who volunteered for military service while their family members were forced into an internment camp. Ida Mae Jones dreams of flight. When America enters the war, the Army creates the WASP, the Women Airforce Service Pilots – and suddenly Ida Mae Jones sees a way to fly. But the WASP won’t accept her as a black woman, forcing her to make a difficult choice of pretending to be white to be accepted into the program. The Girl With The White Flag by Tomiko Higa

On April 1, 1945, allied forces invaded the small island of Okinawa, Japan. This memoir by Tomiko Higa brings her own harrowing experience to life as a seven-year-old separated from her family and struggling to survive alone as some of the fiercest fighting of the war rages around her. The Battle of Okinawa lasted for almost three months and became one of the deadliest battles of the Pacific War. Under The Blood-Red Sun by Graham Salisbury

If you haven’t read this classic yet, now is the time! A page turner for both kids and adults, this fictional story chronicles Tomikazu Nakaji’s experience in Hawaii as a local boy of Japanese heritage, before and after the attack on Pearl Harbor. The world shifted and suddenly it became a terrifying time to be Japanese in America. Aircraft carriers allowed for planes to take off and land from anywhere in the ocean, and were very important to the Battle of the Philippine Sea. Click below to print and color your own! Follow this easy step-by-step recipe to whip up a delicious Flag Day dessert! This Flag Day, show your patriotic spirit by downloading and coloring this American Flag with red, white and blue! 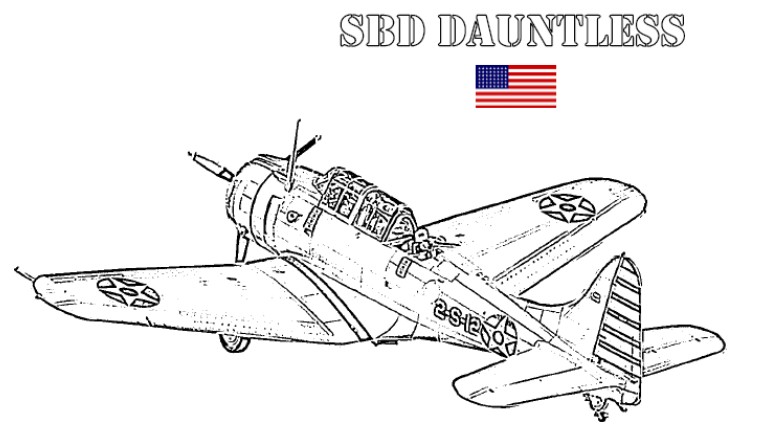 Color This: Battle of Midway Aircraft Introduce your kids to the real meaning behind #MemorialDay with these fun and educational crafts and activities! Put your knowledge to the test! Download and complete this crossword puzzle about the attack on Pearl Harbor. Color The B-17 Flying Fortress

Color this massive airplane that played an important part in WWII and gained fame fighting over occupied Europe. Grow Your Own Victory Garden

Did you know Victory Gardens produced 40% of the vegetables grown in the U.S. during the war years? Watch this clip about the history behind these gardens and then click the button below to learn how to grow your own!

Looking for a fun activity to do with the kids? Learn how to fold five different airplanes ranging from beginner to intermediate level. All you’ll need is some paper, a pair of scissors, a ruler and some double stick tape (if you really want your planes to go the distance).

Introduce your child to the Flying Tigers, a group of pilots who inspired hope in the hearts of Americans in the months following the attack on Pearl Harbor. Have your kids color in these P-40 Warhawks with the iconic Flying Tiger shark mouth design made famous by these brave pilots. Learn more about this famed group of pilots, their revered aircraft and the Museum’s P-40 by visiting our Flying Tiger blog.

Rosie the Riveter represents the hard working women that entered the workforce during World War II. Introduce your child to this important symbol of female empowerment by having them color in this iconic “Rosie the Riveter” poster. Share with them the history of these women who stepped forward to work in factories and shipyards for the good of the country.