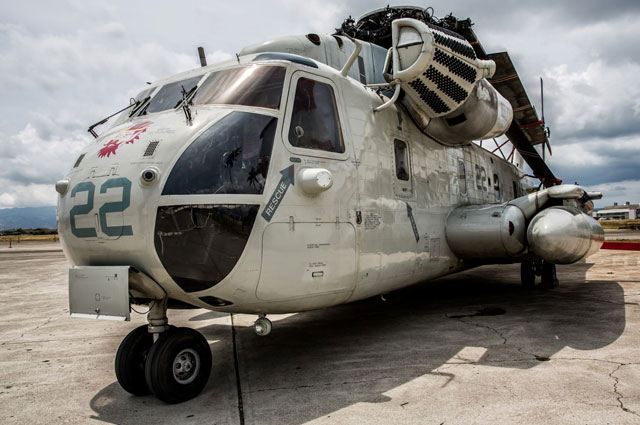 The CH-53 helicopter is the more powerful younger brother of the Jolly Green Giant H-3—and one of the largest helicopters in the world. The CH-53 can fly and hover in extremes of heat and cold and is armored—which is why it serves as well in Iraq and Afghanistan as in Vietnam. It can refuel from C-130 tankers and land on water in emergencies. To save space onboard ships, the tail boom and rotors fold.

The CH-53’s primary mission is to move cargo and equipment, but they play a key role in special operations, making rapid insertion and extraction of troops possible and effective. Navy RH-53Ds were used to sweep mined areas and tow ships.

This CH-53D went to Vietnam and crashed in 1970. It then returned to duty with the Marines, serving in all major conflicts. Most recently serving in Afghanistan in February 2012. It was retired from Heavy Marine Helicopter Squadron HMH-363 at Kaneohe Bay. The Marines have retired most CH-53Ds, depending on Super Stallion CH-53Es until the CH-53Ks arrive). Retired CH-53Ds used for firefighting are called Fire Stallions.

Every version of the CH-53 helicopters has been an asset on and off the battlefield.