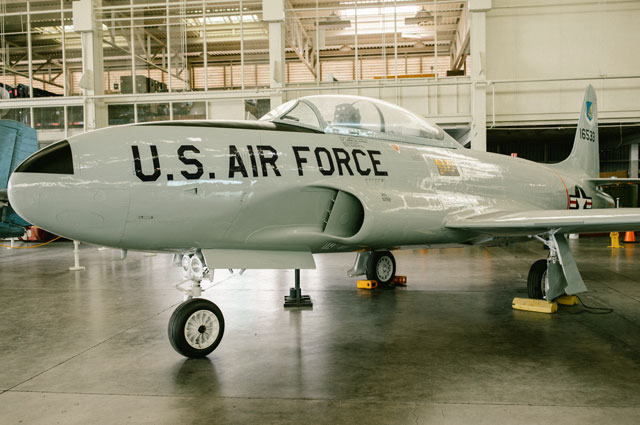 As many military pilots found out after WWII, it’s not easy to transition from flying a piston-powered aircraft to a jet. The high number of crashes led Lockheed to modify the sleek P-80 into the first jet trainer, the T-33 Shooting Star (or T-Bird). The design was a good one—despite its age, the T-33 remains in service worldwide today.

The bubble canopy provided good visibility to the student in front and instructor in back. The extended nose allowed for larger fuel tanks and a greater range than the P-80C. A straight wing gave good performance at low altitudes and excellent maneuverability.

The USAF NT-33A flew until the 80s, even though phasing out began in the 1960s when T-37 Tweet and T-38 Talon aircraft came on line. This also happened in the Navy with the T-2 Buckeye and TA-4 Skyhawk II, but the T-Birds continued to serve as utility aircraft, trainers, drone leaders, and targets for missiles.

The T-33 is one of the world’s best-known aircraft, having flown for more than 20 nations.