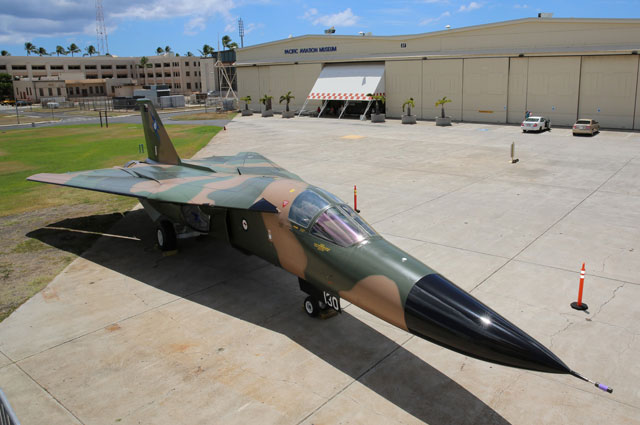 Although designated a fighter (F), the F-111 was a tactical bomber – one that could fly like no other – hundreds of miles close to the earth to avoid detection until bombs were delivered, and then up to altitude at supersonic speed to go home. The F-111 required a new engine, wings, and radar to complete its mission of dropping 8,000 pounds of bombs on a target 1,500 miles away – without refueling.

The first after-burning turbofan engine gave it the power to fly supersonically and efficiency to fly to Europe without tankers. Supersonic speeds and nap of the earth flying required wings that could change position: straight out to takeoff and land and swept for high-speed flight.

Advanced avionics allowed night, all weather flight close to the earth. The radar system could fly at 200 feet in changing terrain without pilot intervention. Pilots could shift to left or right, but radar controlled the altitude. System breakdowns were handled by putting the aircraft into a climb to get away from the ground until the pilot could take control. The entire crew compartment was an ejection pod, taking part of the wing with it for stability. Flotation bags cushioned impact and water landings.

Avionics also located and bombed targets at night and in bad weather – becoming even more important when smart bombs were developed. Also, the F-111 could take off and land on 3,000-foot runways.

It had a rocky start, but the F-111 had one of the safest operating records in history. In Vietnam it had twice the range of an F-4 and could carry two and a half times the weapons load. In 1986, 18 F-111Fs accompanied by EF-111A Raven electronic warfare aircraft flew from England to bomb Khadafi in Libya, the longest strike mission in history.